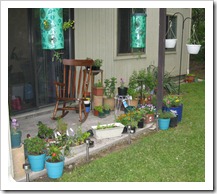 Finished this incarnation of my patio garden last night, but WAY too tired to write. I think I can say that it’s pretty much done, or at least as much as any garden is actually done at any given time. Oh, there’s more I’d like to do, but I’ve pretty much run out of containers and I’m about out of money, too. I have no personal problem with using any cast off pails or other recycled containers for plants, but since this little patio is also my “front yard” and directly faces the entrance to our apartment complex, the management is a little picky about having random 5-gallon buckets sitting around.

We scored some free Zinnias and New Guinea Impatiens from Wal-Mart because they were going to throw them away. I just helped myself, and then the manager said I could keep what I had, but not take any more because since they’re a loss, they have to just put them in the trash, which I think is just wrong. All they needed was some water, and they’ve come right back!

We also decided to take the plunge and get two of those Topsy-Turvy Tomato plant hangers because I was running out of room. So we have grape and roma tomatoes. And I did get a dual hanger for a couple of hanging baskets, one of parsley and another of Salvia. There’s a couple of containers of Stock “Vintage Mix” and a miniature rose bush, and a couple of planters of two different mints, and there are marigolds (the Gem variety, which are edible. And there are other herbs too: basil, oregano, rosemary, and two kinds of thyme. There are still several containers of Mesclun going, but I need to add a few more, and there’s a Banana Pepper.